Apparently there is evidence and it says it in the description, " 🐔 This weekend is your last chance to beat the event. ". I am reverting the edits.

It may seem that Season 4 will stay until November.

There is no Evidence that there will be a new update on 10/28/2019, the developers would have said that "this is your last chance to fight Cluck Daddy".

Save the City from something bad.

Note : This is my opinion, your opinion might be different.

Theres not too much to talk about since it doesn’t have as much updates but whatever. Some things in the Lazerblade Update were bad, mostly the Plane Nerf where it doesn’t turn off in the air and the Cluck Daddy boss fight doesn’t have that much of a reason to even complete it because the vehicle reward is a Land Vehicle, Land Vehicles are not bad but for a boss that is very hard ( especially those Crazy Clucks ), there should be no reason to give just a normal car, it doesn’t have anything special other than “it looks cool”. Season 4 added a new team which is the Villain team but it’s okay, since Raven is just Vanta but a Villain and Phantom which is kinda just Titan but not really.

Season 4 introduced a new aerial vehicle which is a Falcon, I think it’s good since literally no one would buy a Warhawk or Nighthawk ( no one would buy a jet basically ) over the Buzzard. The Nighthawk Buff is great because grinding for it doesn’t just reward a Warhawk with added bombs. Season 4 had 3 vehicle rewards instead of 2 ( Season 1 and 2 ) or just 1 ( Season 3 ). The UFO is great vehicle since it is the fastest helicopter like vehicle in the game. I like how they did not go after what the fans thought which there would be a boss fight in Atlantis, instead it took place in the Military Base which is more suprising than what everyone already thought. The Dev team sorta became more active in their twitter but thats what I think.

Season 4 is one of my kinda favorite seasons due to what they added but the entire “it’s going add in what you guys have been asking for a long time” and “it’s gonna be the biggest season” kinda was misleading since it literally has the least updates out of every season.

What do you think of Season 4? Comment down below.

So it seems taymaster decided to end Season 4 with 4 updates? I thought it would be somewhat bigger than others since they said that but whatever here are some predictions I suppose.

Things that will probably be removed :

We will continue to have vehicle skins, spoilers, rims, emotes, and vehicles ( maybe 3 vehicles like Season 4? ).

If there is one code we will most likely know and we are going to get, it is S34Z4N5 and will also probably reward a vehicle skin.

We should probably be used to this since almost every Season now has a boss fight ( Season 1 doesn’t have a boss fight ) and maybe it will take place in Atlantis unless something else is added in Season 5, maybe the cool looking house in Sandy Suburbs have something to do with the new boss fight unless its for Apartments?

Last Season ( Season 4 ) Phantom was removed from the Hero roster and now we know we might get a new hero and maybe in Season 5, the Hero might be like Aquaman, Spiderman or something else taymaster and his team are planning.

Apartments might finally be added into Season 5 since it seems that Season 4 introduced the buildings you can rent them at.

My idea is that the UFOs attacked some parts of the city after Cluck Daddy was defeated and now some parts of Mad City are in ruins.

Honestly thinking I should reupload the Volcano page, this has more stuff than the original Volcano page.

Anyone know why my Volcano user blog post has more than one category?

Note : This is just a concept of what the Volcano page could be if brought back.

It is also where the Villain Lair is.

VehiclesRoadsterNero
A reply to Commando0967
0

Well there is not really a way to remove radioactive remains. 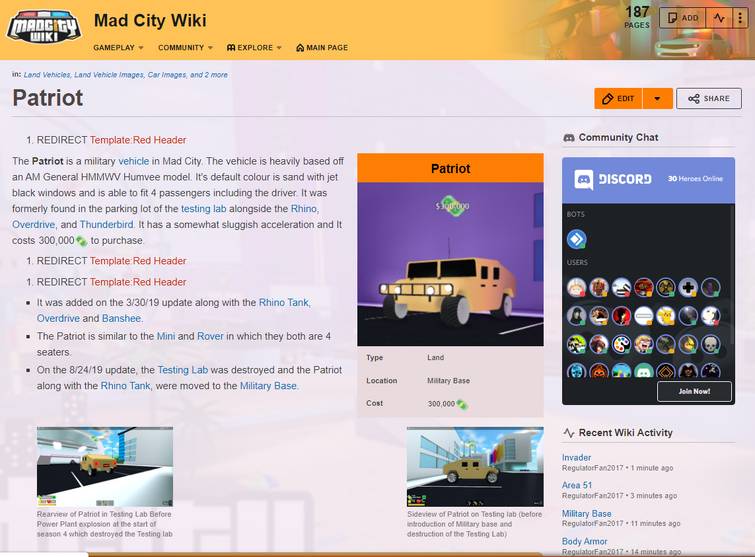 Vehicles
A reply to Commando0967
0

The Update will be out this Friday and there are some possible changes coming, here might be the update thumbnail . 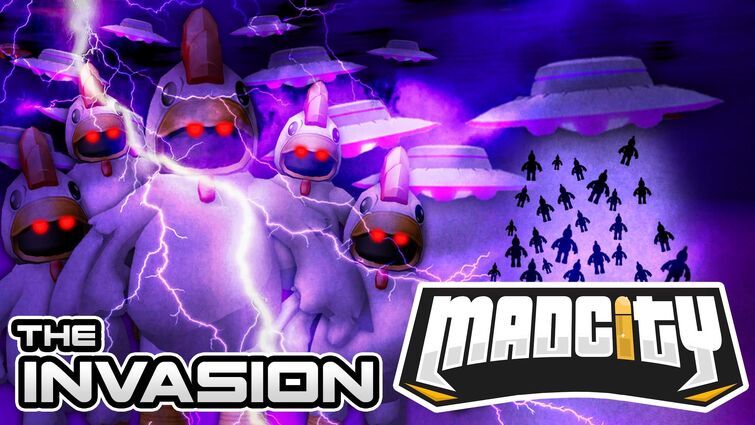 So thats the thumbnail, now the changes.

A poll by taymaster has the Buzzard having a possibility of being nerfed.

Another poll by taymaster suggests that the Warhawk and Nighthawk might get buffed.

Are you excited for this update? What do you think? Comment down below.

Where does taymaster put VIP server links for Mad City?