The Buzzard is a weaponized three-seater aerial vehicle. It is located at the Airport and can be purchased for 1,000,000

A rope can be dropped beneath the Buzzard by pressing the "C" key, which allows for one additional player to grab onto it for transport. It takes approximately four seconds to start up.

The pilot is fully enclosed within the vehicle and thus protected from enemy gunfire. Both passengers, however, are almost completely exposed and can be shot at relatively easily. It is noteworthy, too, that despite being exposed, passengers cannot use any weapons while seated.

One of the main features of the Buzzard is its ability to fire missiles at enemy players by pressing the "F" key. After firing, there is a 5.5-second cooldown period before another can be fired. Each missile deals 40 damage to players and disables aerial vehicles caught in the explosion. A target marker is constantly visible, and marks where missiles will be fired. Missiles can lock onto enemy players, causing them to home in on their target. There are three stages in the missile lock-on sequence; green, yellow and red, with the missile's accuracy increasing with each progressive stage. Each lock-on stage is audibly indicated by a frequent beeping sound that increases in pitch with each stage. In total, the lock-on process takes about five seconds to complete, and will be lost if a target can no longer be seen, or goes out of range. 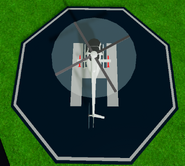 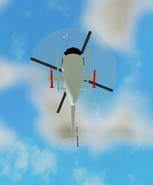