It has slow speed and acceleration but has good handling. It is still faster than some vehicles such as the Rhino, O66-Terminator, and SWAT even though it is a starter vehicle. Despite its sluggishness, it can still outpace Hot Rod.

The car was given design changes in the June 13th, 2020 update, along with the Tracer and the Challenger. 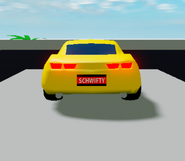