The Cobra is a weaponized two-seater aerial vehicle. It is located at the Airport and can be purchased for 2,000,000

Like other helicopters, a rope can be dropped underneath it by pressing "C", allowing an additional player to be transported at the cost of being exposed to gunfire.

It is faster than the Buzzard, has better handling, and its missiles will lock on faster, but their missiles' recharge times are the same.

In the November 23rd, 2020 update, it was given design changes, along with the Plane.

The Cobra has the ability to launch missiles by pressing "F". A missile will deal 40 damage to any players and disable helicopters caught in its blast radius.

At all times, a crosshair is visible on the pilot's screen. When not locked onto a target, it will be white and centered. When a missile is fired in this state, it will shoot straight in the direction of the crosshair. The crosshair cannot be moved, and the only way to aim through this method is by steering the Cobra.

When an enemy player is onscreen, the crosshair will lock on automatically by moving over the target and audibly beeping. Once locked onto a target, the crosshair will cycle through green, then yellow, then red. When green, missiles will shoot in the crosshair's direction, no matter its onscreen position. When yellow, firing will cause the missile to actively follow the crosshair. When red, they will seek and move towards the target. The missiles take a total of three seconds to fully lock onto a target and, once fired, have a cooldown of five seconds.

The Cobra has a unique cruising feature that causes it to maintain its momentum after the pilot has stopped moving it manually. It will continue to move in whatever speed and direction the pilot was flying before they stopped. 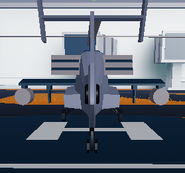 Right
Community content is available under CC-BY-SA unless otherwise noted.