Crates are interactable (occasionally mini heist) objects that fall from the sky at random times at predetermined locations. Depending on their color, they will give either cash or exclusive weapons.

There are two variations of crates in the game: red and green. When one first spawns falling from the sky, a loud hissing noise will play, and a red flare will emit from the ground. signaling its land location. Cash cannot be obtained before green crates land, and attempting to take an item from a red crate before has landed will not yield an item and instead will prevent the player from interacting with it again. Crates will disappear two minutes after landing.

The red crate will give either the Raygun, Minigun, or UZI-S, and the lid of the crate will display its contents.

When the green crate spawns, it can be secured by players in order to obtain 3,500

and 250 XP. To secure, one must stand within the blue circle surrounding it, and the circle will become red as the progress bar fills. As a criminal secures the crate, music will play. If a Police or a Hero steps into it during a capture, the music will stop, the progress bar will no longer fill up, and the circle will become blue again, and only resume once they leave the circle. Only criminals and villains can secure green crates. The securing process can be sped up if multiple criminals are inside the circle, as well as speeding up the music heard while securing the crate.

Crate on the parking structure behind the Casino.

Crate in the Gas Station.

Crate in the desert lake. 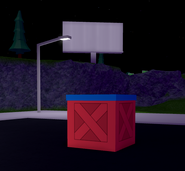 Crate in the parking lot at the front of the car dealership.

Crate at the Pyramid door.

Crate on the corner of the beach near the Casino. 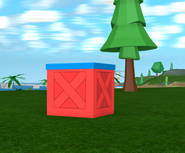 The crate on the hill behind the buildings to the left of the Airport's spire building (when facing the Gun Store).

The Crate in the parking lot to the left of the Criminal Base.

The crate on the edge of the beach next to the water bridge to the left of the Airport. 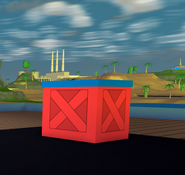 The Crate on the corner of the road next to the Jewelry Store.

Crate in the parking structure near the Jewelry Store.

Crate in near the House Heist in Sandy Suburbs. 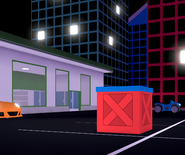 Crate at the mini-mart. 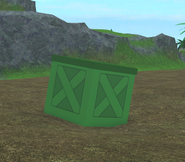 Crate in the dirt road behind the Gas Station near the Jewelry Store. 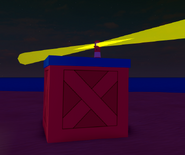 Crate at the beach in front of the lighthouse.