The Golden Key is an item obtained from a treasure chest on the left side of the Pyramid's vault.

Its function is to open a secret room in Cluckdonalds that contains the Death Ray. The key must be in the player's inventory to obtain the Death Ray and will be removed after obtaining the Death Ray.

Former method of obtaining a key 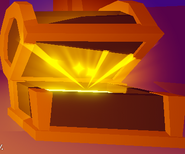