The Invader is a limited single-seater land vehicle that was introduced on October 11th, 2019, as a reward for defeating Cluck Daddy. It is characterized by its massive rear wing, large boosters, glowing sections, and relatively small size. The hood lights, booster tips, and side vents change color with its "underglow."

It features quick acceleration that beats supercars such as the Vapid, as well as a fairly fast top speed. Handling and drifting can be sharp and precise when driven well. Its only downsides are weak off-roading ability, low seating capacity, and the fact that it is unobtainable. 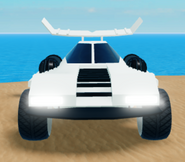 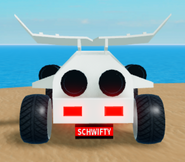