The Lazerblade is a special melee weapon that was obtained by unlocking a crate around the interior edges of the Military Base with the Silver Key.

It deals 80 damage per hit and can be swung every second, making it the highest damage dealing melee weapon in the game. Unlike other melee weapons, it will cause the player to play a unique animation and glide forward a short distance, unaffected by gravity. It can also be used to deflect bullets from the front side. The color of the blade is determined by what team the user is on. 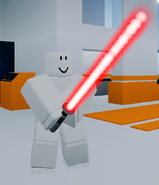