The Prison is the Prisoner spawn point and confinement location. Prisoners must escape from the prison in order to become a Criminal. The prison is loaded with barrels, boxes, crates and garbage cans to loot and craft ways to escape, or, alternatively, prisoners can use one of the two large gates (located by the SWAT Armory and the Police HQ) to escape, which requires nothing to use, but will raise an alarm (which can be heard across the map).

There are two floors inside the cells complex. Prisoners spawn in a cell upon joining the team. An NPC and a box are located in the cells complex. It is connected to the giant room with a few tables and fences. The giant room leads to the police base and the Comms room. The comms room is a police spawn that contains weapons and security cameras, which requires a keycard to access. There are also two halls connected to the giant room. One leads to the back entrance of the SWAT area and the outside. Another hall leads to the exit. The cafeteria is connected to that hall leading to the outside and so as another hall leading to a small outside area and a movie room.

The cafeteria includes many tables that can be sat at, and a lunch counter, with various food trays that change every in-game day. Behind the counter is an assortment of stoves and other kitchen appliances that can be interacted with if the player chooses the chef job. There is also a back freezer/pantry room with some patties that also can be used by chefs.

The utility room contains a table that has pickaxes on it that can be used for the miner job. It also is connected to the laundry room.

Through the utility room is the mine, a large open area with several barrels that can be looted and an assortment of rocks that can be mined with the pickaxe.

The park exit leads to a long walkway with entrances to the movie room, and the bathrooms. At the end of the walkway is the park, an open area with a box that can be looted and a bench.

There is a lockpick location near the gate escape 2. It will lead to the outside next to the police base.

There is a parking lot in front of it that houses the Camaro, Dominator, Cruiser, and Tracer. A hole under the electric fence allows prisoners to escape by crawling underneath. There is also two rooms with doors that can be opened with a keycard. Two of them lead to the watchtowers.

There is a pet center located next to the hole under the electric fence where Police can adopt a Police Dog and customize (with ownership of the Pet Plus game pass) or get toys for them.

The SWAT area is located next to the gate escape. It can be accessed by going through the open area at the front of the location. A Helicopter is on the roof and can only be accessible through the police base. A Keycard can give access located on the back of the area.

The inside has a table and some TVs. Certain weapons can be collected there. Players can also buy Body Armor and get their regular clothes. A SWAT is located at the building which can be drove out from the open area.

There are three jobs that can be completed for XP and Cash.

Players can loot boxes, crates, barrels and garbage cans around the prison, or pickpocket police officers to get materials for crafting objects to escape prison, or for other uses. Players can also buy some of these items from a person near the mines. Below is a list of items Prisoners can obtain via looting, crafting, and pickpocketing:

Players use these items for other purposes than to escape.

These are escapes from the prison that players can use.

Front Gates from inside prison

(Pre-revamp) Prison viewed from top of Police Base

(Pre-revamp) Cell Block A viewed from the Workout Area

(Pre-revamp) Entrance to cell area in Cell Block A

(Pre-revamp) Alternate view of cells area in Cell Block A 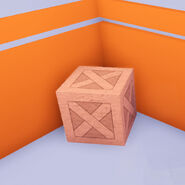 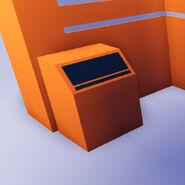 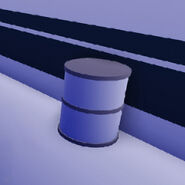