The Rhino is a weaponized four-seater land vehicle. It was added on the March 30th, 2019 update. It can be found in the orange building parking lot in between the Fruit Store and the Casino Park Home for 4,000,000

The Rhino has the ability to fire powerful explosive shells from its turret, which the driver can aim by adjusting their camera angle. Like the SWAT Van and O66-Terminator, it sports bulletproof tires.

Pressing the "F" key will cause a shell to be fired from the turret. Each shell is hitscan and deals 80 damage, with a cooldown of approximately seven seconds. The driver will view white crosshairs wherever the turret is aiming, similar to driving the Buzzard and Warhawk. 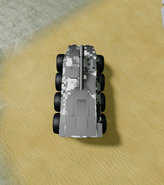 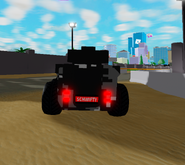