As players rank up, they will be granted rewards specific to the ongoing season. There were a total of 20 rewards obtainable in Season 4.

The updated Hero base.

Atlantis as it appeared at the beginning of the Season.

Atlantis after it was updated.

A building that would later become the Sea Breeze House.

A building that would later become the Grand Park Apartment. 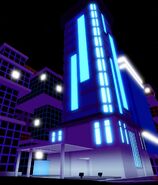 A building that would later become the Utopia Towers Penthouse.

What became of the nuclear power plant and its surrounding area after it (presumably) exploded.

The bridge as it appeared in Season 4; ravaged from the nuclear power plant's accident and roughly patched with rusted sheet metal. 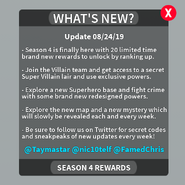 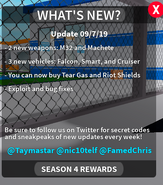 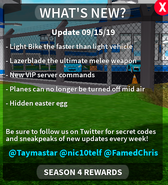 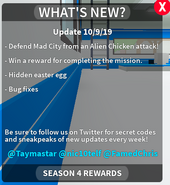 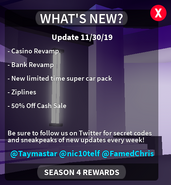 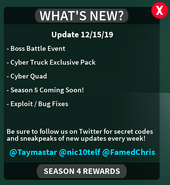 12/15/19 Changelog
Add a photo to this gallery
Retrieved from "https://mad-city.fandom.com/wiki/Season_4?oldid=48878"
Community content is available under CC-BY-SA unless otherwise noted.