Star Lord was Season 4's second boss. It resided in an underwater arena located inside of Atlantis. Players would have made five offerings using Star Crystals to initiate the battle against it. Defeating Star Lord would have given any survivors the Invisible Boat Mobile. Star Lord was removed from the game in the February 1st, 2020 update in the middle of Season 5, and returned in Season 6's live event, along with Cluckles and Kua Kua. 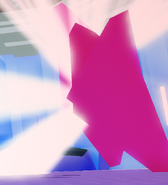 The victory message.
Community content is available under CC-BY-SA unless otherwise noted.
Advertisement