Tram stop facing the Prison, moving around the monorail while active

with the VIP game pass)

The Tram is one of the eight primary heists available for criminals to rob. It was added in the June 13th, 2020 update. It consists of four random carriages and moves along the monorail while active. Completing this heist can reward up to 8,025

The tram will start up ten minutes after becoming inactive. Once active, players can enter by opening side doors or roof hatches. It can also occasionally be accessed from the outside by walking through the gaps between each car.

The tram is made up of two inaccessible locomotives and four carriages, three of which can be any of the four layouts while one is always guaranteed to be a Passenger Carriage. The cash earnings for each carriage listed below is doubled for players with the VIP game pass.

The tram will first spawn at its starting station and a bell will sound, alerting players of its activity. It will proceed to drive along its railway which encompasses most of the city. It has two stops; one facing the prison, in between the city and Sandy Suburbs (also its starting location) and one near the park, adjacent to the Car Dealership, Fruit Store, Cluckdonalds, the Grocery Store, and a Most Wanted Board. It goes around the railway three times, stopping at each station for 15 seconds, before ultimately stopping at its initial location and despawning, being replaced with a non-interactive model until it starts up again. Bells can be heard at random intervals throughout the duration of the tram moving. 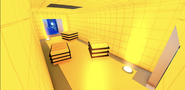