The Warhawk is a weaponized two-seater aerial vehicle. It can be purchased at the Airport (now at the Aircraft Carrier) for 4,000,000

As with other planes, pressing "Shift" will toggle the Warhawk's engine and can be moved with the. It is currently known to be the second-fastest aerial vehicle in the game and the third-fastest vehicle in general.

Missiles can be fired by pressing F and they deal 60 damage each. The missiles take two seconds to fully lock on to a target and have a six-second cooldown. 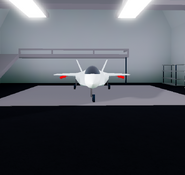